“Schools of the future” competition

Since 2009, the America for Bulgaria Foundation has been organizing the “Schools of the Future” competition, aimed at modernizing the environment in Bulgarian schools. Thanks to the funding received in the competition, over 30,000 Bulgarian students in 45 schools gained access to new laboratories in natural science and are using up-to-date technologies.

Despite its great social significance, six years later, the competition had not received serious media coverage and the public was not aware of the foundation’s contribution to improving the school environment in Bulgaria.

Drag media attention to the importance of the project and the contribution of the America for Bulgaria Foundation for  improving conditions in Bulgarian schools. 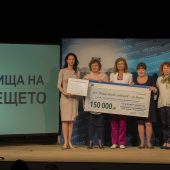