All other tender participants appealed government decision to the Commission for Protection of Competition mainly on the grounds that government chose the lowest investment offer. Followed negative media publications challenging the selection of concessionaire and hinting hidden connections between Meridiam and controversial local businessmen.

So far Meridiam and Munich Airport haven’t had communication  activities. Meridiam was not known by the general public who is in principle suspicious to investment funds. SOF Connect and Munich Airport  were exposed to risk of expanding negative media content and image worsening. 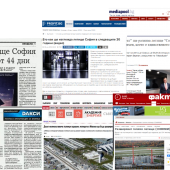